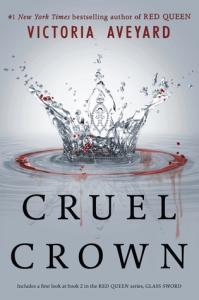 Synopsis: Two women on either side of the Silver and Red divide tell the stories no one else knows.

Discover the truth of Norta’s bloody past in these two revealing prequels to #1 New York Times bestseller Red Queen.

Queen Song—Queen Coriane, first wife of King Tiberias, keeps a secret diary—how else can she ensure that no one at the palace will use her thoughts against her? Coriane recounts her heady courtship with the crown prince, the birth of a new prince, Cal, and the potentially deadly challenges that lay ahead for her in royal life.

Steel Scars—Diana Farley was raised to be strong, but being tasked with planting the seeds of rebellion in Norta is a tougher job than expected. As she travels the land recruiting black market traders, smugglers, and extremists for her first attempt at an attack on the capital, she stumbles upon a connection that may prove to be the key to the entire operation—Mare Barrow.

Once again, I appear to be in the minority when it comes to my opinion on Victoria Aveyard’s novels—however, this time, it is in the complete opposite way. I am pleasantly surprised by how much I enjoyed reading these two novellas. These are the first prequel novellas to Victoria Aveyard’s Red Queen series—a series that I have not been a major fan of so far.

Though the idea for the plot of Red Queen is intriguing, unique, and something that would normally be right up my alley, I do not believe it is executed as well as it could be, which ends up being a massive detriment. However, Cruel Crown has further confirmed two thoughts I’ve had ever since I began the series last year. First, that Victoria Aveyard is in fact an absolutely spectacular writer. And second, that there is just something about the main character, Mare, that I genuinely cannot stand.

Over the course of these novellas, we get an opportunity to see Aveyard write from two completely fresh points of view. Whether sharing the thoughts of a young girl from a lower class Silver family as she turns into a queen, or exploring the mind of an influential member of the Red rebellion as she realizes her full potential, Aveyard masterfully portrays her various characters. Her talent as a wordsmith cannot be denied and these novellas—with their varying points of view—allow her to present us with a more solid demonstration of this than Red Queen did.

As she has been displaying since her debut novel, Victoria Aveyard has a natural aptitude when it comes to world building. Her background in screenwriting is quite apparent as she creates every setting, unfolds every single action, with a vivid palette of words. This is something that has caused me to completely fall in love with her writing style, despite not always being thrilled with her characterization or what she chooses to focus on in her plotlines.

I’ll now briefly touch on my specific thoughts about each story individually.

Queen Song briefly recounts the life of Coriane, queen of Norta, first wife of King Tiberias, and Cal’s mother. We learn of the trials she faced through her younger years—her struggle to find some source of happiness. We are able to get a brief glimpse into her romance with Tibe and the torments that plagued her through the final years of her life. A damaged, desperate, yet inherently brave young woman fighting against demons—both tangible and intangible—Queen Coriane’s story is truly a captivating one.

This ended up being my favorite of the two novellas—in fact, I really wish that this story were a full novel in itself. I would have gladly read many more pages about Coriane’s life, as well as the life of the kingdom itself prior to the events of Red Queen. It is hard to imagine feeling for anyone other than the Reds, but Coriane’s story is surprisingly heart wrenching. This is due primarily to the fact that Aveyard forms her into an extremely kind, relatable figure, despite her slightly elevated standing in society.

Right from the start, Aveyard shows the same vivid and technically proficient writing as she demonstrated in Red Queen. Coriane’s pain is understandable, clearly rendered and fluidly woven into the overall tone and atmosphere of the novella. There is a repetitiveness and childishness to the way she thinks and handles the emotions she faces through the beginning of the story. This at first got on my nerves, but the more I thought, the more I realized how perfectly Aveyard captures the way in which a young girl might confront extreme sadness. As Coriane ages, this repetitive method gives way to a much stronger, more mature one, displaying solid character progression in a short amount of text—not an easy feat.

The biggest complaint I have is not even much of a complaint, per se. I really just want more. I want more details about her early life—more of her relationships with her best friend, brother, and father. I want to see more of her courtship with King Tiberias. Their love story is sweet and beautiful, not only elaborating on their history, but also adding a new dimension to Tiberas’ character. However, it is a comparatively small portion of the novella. The ending is quite rushed—understandably—and though I thoroughly enjoyed this novella, I do wish there was just a bit more to it.

In Steel Scars, we follow Captain Diana Farley—a key figure in the Red rebellion—through the months that lead up to the moments when her life first becomes entangled with Mare Barrow’s. Alternating between Farley’s point of view and a series of secret transmissions, Aveyard paints a picture of a strong, ambitious leader discovering her true strength as she pushes through her fears and weaknesses to do what she believes is right.

Though it starts off a bit slow, this story quickly begins to pick up, and I found myself pulled into the highs and lows, the triumphs and struggles that made up Captain Farley’s past. Though we do not begin at the start of her time in the rebellion, we get to see a very different side of Farley—a more impulsive, vulnerable side as she tries to make a name for herself and establish a place of power in the rebellion. It was interesting to see how she has changed, how much she matured, and the full extent of both her personal and professional strength.

Again, Aveyard’s writing is as beautiful and skillful as always. I found her world building in this particular story to be some of her best so far, and the action sequences were exciting and enthralling. As this is a spoiler-free review, I will only go as far as saying that the mystery guest who makes an appearance in this plotline and their relationship with Farley was probably my absolute favorite part. This is what has made me particularly eager to continue onto the next book in the series.

I must admit, the decoded messages were a bit confusing and difficult to follow at times, but as the story progressed, I found myself getting more used to reading them. Since each series of messages follows a new chunk of plot, understanding what events they are referring to and whom each codename belongs to becomes quite straightforward. They also consistently become more and more intriguing, which aids the ease of reading them. Though I was not a complete fan starting out, they grew on me, and I ended up really appreciating the reality they add to the atmosphere of Farley’s story.

Astonishingly enough, despite my mixed feelings on this series as a whole, I am actually feeling quite eager to continue on with it after reading these novellas. The time away from it and this brief glimpse at some of the other characters and their backstories has been oddly refreshing. I did not enter this novel with high hopes, but I came out of it very pleased with what it held. Though these stories are not necessarily integral to one’s understanding or enjoyment of the series as a whole, I would personally recommend giving these two novellas a try as they do enrich the world.