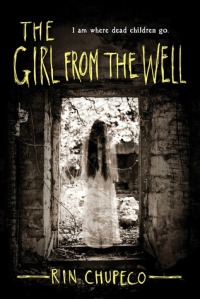 The Girl from the Well by Rin Chupeco

Series: The Girl from the Well #1

Synopsis: You may think me biased, being murdered myself. But my state of being has nothing to do with the curiosity toward my own species, if we can be called such. We do not go gentle, as your poet encourages, into that good night.

A dead girl walks the streets.

She hunts murderers. Child killers, much like the man who threw her body down a well three hundred years ago.

And when a strange boy bearing stranger tattoos moves into the neighborhood so, she discovers, does something else. And soon both will be drawn into the world of eerie doll rituals and dark Shinto exorcisms that will take them from American suburbia to the remote valleys and shrines of Aomori, Japan.

Because the boy has a terrifying secret – one that would just kill to get out.

The Girl from the Well is A YA Horror novel pitched as “Dexter” meets “The Grudge”, based on a well-loved Japanese ghost story.

I am finding that giving voice to my thoughts about this novel is a far trickier task than I was expecting. I liked many aspects of the novel and had a pretty good time with it. However, I never got caught up in the plot the way I hoped I would. It took me forever to get through this novel because I was not overly motivated to keep coming back to read it, despite wanting to know the fate of the characters. At the heart of my struggles with the story were both the writing style and the fact that I was not at all scared while reading.

However, just because I personally didn’t find it scary doesn’t mean that it isn’t, or that others won’t. This may be exactly the creepy book you are looking for. There are some fantastic scenes with Okiku exacting her revenge on those who deserve it—parts that are very eerie and pretty gorey. Those were some of the best chapters to read as they were action-packed and fast-paced, while the rest of the novel went at a much slower pace.

I have to admit that I was a little disappointed at not being too scared while reading. I don’t scare very easily at all, but I had heard plenty about how terrifying this book was. And I completely agree that it was much different than a lot of American “horror” or “thriller” novels—it was a very different sort of narrative. But unfortunately it still didn’t creep me out.

I absolutely do not want to focus completely on negatives either, because there was plenty to love about this book, and I really did enjoy it overall. It reads exactly like watching a horror movie—and not just any sort of horror movie, but the kind that I really love. Honestly, that was my favorite aspect of the whole thing. It reminded me of the scary movies I have watched with my family and friends over the years

In this novel, we follow the main characters—cousins Tark and Callie—through the eyes of Okiku, a ghost that has taken an odd interest in Tark. Okiku is a l300-year-old spirit, unable to leave Earth and determined to take revenge on those who murder innocent children. She moves around the world freely and frequently.

However, when she witnesses a malevolent spirt that appears to be part of Tark, related somehow to the strange tattoos that are scrawled all over his body, she remains. Though she has never taken enough of an interest to stick around any particular human for very long, there is something unusual about him, and that keeps her attention.

Okiku is a unique character, and makes an interesting narrator for the novel. The main thing I noted about her was how she referred to the people she was around. She counts everyone and everything she comes across in her environment, and always distances herself from the living by referring to them by something like a job title or a distinguishing physical feature. The only people she regularly refers to by their names are Tark and Callie. I thought this added a lot to the story, showing the importance of her connection to them.

I liked Tark and Callie, but will admit that they are very one-dimensional characters. In fact, pretty much everyone but Okiku is. There is not a lot development in their personalities, even after some of the painful and traumatic experiences they go through. It was highly unbelievable that they would not have been changed or affected more than they were. And though I liked Okiku, I also felt that she didn’t do nearly enough. She mainly just watched things happen—I was expecting her to intervene more than she did. This is part of what took away from the creepiness of the narrative.

I have always found Japanese folklore—in fact, folklore from any culture—extremely fascinating to study. That made it even more exciting when I found out that I already knew a lot about the story this novel is based off of, and the terms that are used frequently throughout it. Even if you don’t have previous knowledge of these things, they are addressed well enough throughout the story that readers will not be at all confused or be left feeling like they lack important information. I really liked the inclusion of Japanese culture into the plot—it added a lot to the atmosphere.

The plot progressed rather slow in my opinion, particularly toward the middle of the novel. I think this was due in part to the writing style, not just the overall plotline. It’s a bit difficult for me to pinpoint my feelings about Chupeco’s writing and narration style. On the one hand, it was very unique, but on the other hand, I felt that it did not flow well and was sometimes hard to follow. I believe that the choppiness of her writing style was suppose to add to the tone of the novel, but it was just challenging and sometimes tiring to get through. For me, it didn’t add anything to the story, it just pulled me further away from it.

The narrative style is different from anything I’ve read before, however—it is first person omniscient, which is a point of view rarely seen in novels. Okiku tells the reader what she observes, but she also has insight into people’s thoughts to a certain degree. This goes to the point where the narration takes on a third person omniscient feel, then pulls the reader back into Okiku’s point of view. There may have been some limits, making it first person limited omniscient, but I couldn’t quite tell. So while it was not my cup of tea, I do commend Chupeco for utilizing this unusual style.

Overall, this novel did not quite live up to the hype for me, but I still found it to be an enjoyable read. It was one of those novels that was simply good—not bad, not mind-blowingly wonderful, but good. I would definitely recommend giving it a go, and I’ve already picked up a copy of the sequel, so I do plan to continue on sometime soon.

5 thoughts on “Review: The Girl from the Well by Rin Chupeco”