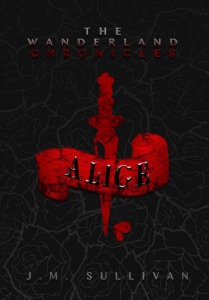 Ever since the outbreak of the Plague, life hasn’t been easy, and for seventeen-year-old Alice Carroll, it just got worse. Her sister, Dinah, has contracted the ‘un-deadly’ Momerath Virus and without a cure, will soon be worse than dead. She’ll be momerath.

Alice must leave the safety of the Sector and venture into Momerath Territory to find the antidote – if it exists. Chasing a rumor about a mysterious doctor with the cure, Alice falls down the rabbit hole into Wanderland, where ravenous momerath aren’t the only danger lurking.

I always love a good retelling—if it is a retelling with a dark and gritty twist to it, even better. For me, this novel checks off all the boxes. It is a wonderful reimagining of Alice in Wonderland that has plenty of its own creativity and uniqueness, while devotedly paying homage to the original work in clever ways. It even takes the classic zombie plague idea and turns it on its head as Sullivan puts her own intriguing spin on the idea. With a post-apocalyptic setting, a witty and resilient heroine, and an abundance of gory and riveting fight scenes, this debut novel is a magnificent addition to young adult literature.

In this novel, we follow a young girl named Alice Carroll, who is living in a fortified sector with her sister, Dinah, as the world around them succumbs to the Plague that has rapidly broken out. This virus has taken hold of many people, turning them into undead creatures that survivors have dubbed “Momeraths”—rage-filled zombie-like beings that ravage the land and many of the stragglers that remain unprotected in this post-apocalyptic society. The residents of the Sector do not dare venture past the safety of their borders into this frightful landscape.

When Dinah begins to show signs that she has contracted the Momerath Virus, Alice will go to any lengths to find a cure to save her life. After hearing a rumor that an antidote may exist, or at least be in progress, Alice decides to risk everything to venture out into Wanderland—still crawling with Momerath—in order to track down the doctor who purportedly has the one thing that can restore balance to her world. This journey won’t be an easy one, but Alice steps up to the plate, ready to tackle any challenges thrown her way.

I was pulled into this story right from the very start. It takes off at a fast pace and continues to hold on to that until the final page. It is impossible not to get completely wrapped up in this fascinating story, and I found myself tearing through it, dying to see what would happen next. Every single aspect of this novel is beautifully built up—it is easy to fall into the world and let it take form around you. You feel a part of the journey, running right alongside Alice as she navigates all the perils—those both expected and unexpected—of Wanderland.

One of the many reasons that made me fall in love with this novel was that is felt a lot like two of my favorite video games—Alice: Madness Returns and the Fallout series. It was as if these two settings fell together, which resulted in an absolutely incredible reading experience.

On a similar note, this felt very much like a game or a movie due to the wonderful descriptiveness in the narrative. Sullivan is a master at showing rather than telling. Her intricate details assist the reader in visualizing the settings and characters without hindering their own imagination. She achieves that perfect balance that allows each person’s experience with this novel to be a unique one—each mind will add its own little spin on things.

The creation and development of the characters was, by far, one of the strongest points of this novel. I personally adored the way Sullivan showed the key traits of the original works’ characters in their Wanderland counterparts. Alice is an incredibly solid and believable heroine. It was wonderful to see her continually find that strength inside her, and watch her sort of emerge from her shell into a snarky, witty, and strong fighter.

The cast of quirky characters, both villains and heroes alike, were very well-developed and three-dimensional. Though it is hard to choose, I’d have to say that my particular favorites were Chess, Bug, and Dr. Abbott. I thought that she connected them to Carroll’s classic characters in absolutely brilliant ways. It was aspects like this that really left me appreciating how much effort she put into staying true to the original story while making one that was entirely her own.

J.M. Sullivan is a fresh voice in young adult literature, and definitely one who is sure to go very far. Her immense talent for writing shines through in every aspect of the narrative. This novel was a deliciously intense ride through the world of Wanderland, as we follow some well-loved characters on a journey we have never before seen them take. Whether you are a fan of Alice in Wonderland or not, I would very highly recommend giving this novel a read. With twists and surprises around every corner, this is a book that I believe will have every reader finding themselves swept up into Alice’s adventures. I know that I am truly looking forward to reading future installments in this series.