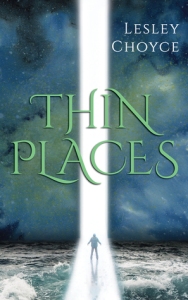 Synopsis: A dazzling story told in verse, of sixteen-year-old Declan Lynch and the girl whose centuries-old voice rings in his head.

One day, Declan Lynch, a regular teenager, starts hearing a girl’s voice inside his head. Eventually, he even begins to see her. Though he’s not certain the girl, Rebecca, is real, Declan finds himself falling for her. She shows him visions of places and people he has never seen — places he feels compelled to find in hopes of meeting her.

His quest takes him to County Sligo, Ireland, and its “thin places,” spots where the earth and the spirit world seem almost to touch. His slightly crazy Uncle Seamus takes him in, as Declan’s search has him wondering which world he belongs in — his, or the one belonging to a girl who might not even be real.

I am having a lot of trouble gathering together my thoughts on this book. A novel in verse, this is a short and poetic read in a beautiful setting. However, though verse novels always tend to be quicker reads, this one was way too short, in my opinion. So short, that I had absolutely no time to connect with the characters or the plot before it was finished. Though I fluidly sped through it, I never had a chance to involve myself in it. This is what makes voicing my thoughts particularly difficult—this novel left me with a sense of confusion and incompleteness.

This novel had an intriguing and eye-catching plot to me for a number of reasons. We follow a young boy named Declan Lynch, who is no stranger to hearing voices in his head. For the first sixteen years of his life, those voices took on the form of characters, involving themselves in his decision-making and all he did. Despite this, these characters still sounded like his own internal voice, allowing him to retain some sort of connection with reality.

One day, however, this changes when he begins to not only hear the voice of a girl named Rebecca, but is able to see her materialize in his head. The strong connection he immediately feels to Rebecca sends him on a journey to County Sligo, Ireland. Declan is thrust into the arms of his estranged Uncle Seamus, as he attempts to locate Ireland’s “thin places”—where the world of the living is believed to meet that of the deceased—and unite with this mysterious girl.

I was expecting this to be a sweeping journey in a beautiful country as a young boy answers a calling in himself to uncover a hidden portion of family history and discover who he is—where he fits into the world—in the process. What I actually found was that over half the book had flown by before Declan even arrived in Ireland to begin his quest to find Rebecca. This left very little time for what I thought would be—and what was represented as—the main plot point in the narrative, given the synopsis.

The characters were incredibly one-dimensional, as the length of this novel gave them little to no room to be developed. I absolutely could not connect with a single one of them, simply because there was no time. The narrative barely skimmed the surface of key elements such as characterization and world-building. It is driven much less by the characters and descriptions and much more by dialogue, which did not serve this novel well. Instead, it heavily weighed the text down.

On top of everything, this novel was insta-love central, aggravated immensely by the length of the narrative. This is never usually a good thing to have in a story—it is definitely one of those overused and highly disliked tropes in writing. The romance feels like it is just haphazardly shoved into the plotline. From the first second that Declan sees Rebecca in his mind, he instantly falls in love with her, and this takes up a huge portion of his thoughts for most of the novel. They haven’t met, he has no idea whether she is even real or not, and yet she is automatically the love of his life. This “romance” took over the majority of the narrative.

On a slightly more positive note, despite my problems with the plot and characters, the writing was surprisingly delightful in some ways. While there were some problems, the overall prose could be quite beautiful.

The only complaint I had when it came to the writing aspect of the novel was the fact that the layout of the verses—a key and very compelling point in a verse novel—felt very random and disjointed. Part of the art of a verse novel is to arrange the lines of text and breaks in those lines so that they add to the tone and significance of the plot. So not only does the writing itself need to be beautiful, but that layout has to be meaningful as well—preferably not feeling like a hasty jumbling of words.

In the end, I unfortunately did not particularly enjoy this story as a whole. It left me feeling extraordinarily unsatisfied and as if I had missed a huge chunk of plot that should have been there. I just needed more from this book and it never delivered. It was a nice, quick read that definitely staves off any sort of reading slump, but that was one of the only positives I felt by finishing this novel.

One thought on “Review: Thin Places by Lesley Choyce”