Today’s post is a guest post by the very talented author Jeremy D. Holden. I have had the great pleasure of reading and reviewing both of his novels (Sea of Doubt and Valley of Time), and when I reached out, he kindly agreed to write a guest post for my blog. As many of us here in the book blogging community are writers and aspiring authors, I asked him to speak about his approach to writing novels.

I am incredibly honored that I have had this chance to work with him to promote his fantastic series–the Mal Thomas Mystery Series! Please make sure to check out Jeremy on his Twitter, Goodreads, and Amazon author page. There are also links to the Goodreads pages of his individual titles scattered throughout, so definitely make sure to check those out as well!

How I approach writing my novels 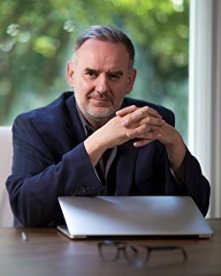 Ariana had asked me to write some thoughts around how I approach writing my novels for her excellent blog, and I was more than happy to oblige.

For me, writing a novel is akin to painting a landscape that you may have glimpsed in the past, but aren’t able to look at while you’re painting it.

I spend months just thinking about the scene, imagining and remembering things which are relevant to the overall vista. At first, they appear to be dissonant elements, each of which is somewhat out of focus, but then the more I think about them, the more they crystalize in my mind.

I very consciously never write down any of these elements, for fear that if I do they will be fixed in time, and therefore unable to evolve in my consciousness as they need to.

This process of letting the different elements of the painting appear often takes about six months, before I’m ready to start seeing how they might begin to fit together. I never push things at this stage, but rather allow my unconscious mind to make the connections as it sees fit.

All at once there will be a realization that the various strands are ready to form together into something resembling a cohesive whole. At that point, perhaps on a wet afternoon or in the wee hours of the morning, for the first time I’ll allow my mind to fully let things start to form together.

Once I’ve arrived at this point I still won’t write down everything that has formed, because I’m loathe to shape the story prematurely. So, I will let this partially visible landscape sit with me for a number of weeks, as the infant chapters continue to assemble.

Sometime during this period I’ll recognize that a barrier or hole exists in the connected narrative, and in order to stitch it together, I’ll go and swim laps. Something about being fully immersed in water and the sensory deprivation, allows me to think with greater clarity.

And then, because I haven’t been greedy or impatient in my desire to rush its inception, I’ll be rewarded with the recognition that I’m ready to layout the complete flow of the story.

In the case of Sea of Doubt and Valley of Time, as well as with the new novel I’m working on, Halo of Power, I’ve been able to have a summary outline written in just several days, because the narrative is already formed in my mind.

From there, in each case it has taken just five weeks to have an early draft of the full novel completed. When I tell people that they are often surprised at the short time period, but in reality the full creative process I’ve described actually takes closer to nine months.

And of course, during those roughly five weeks, it isn’t a simple process of direct translation from my fixed thoughts, as the inventive mind is fully engaged, and the story is still being refined in real time. With each book, at least twenty percent of the storyline was created during the writing period itself.

I prefer to write my books in January, after the distraction of the holidays is passed, and while the longer winter nights and colder weather is upon us. And in truth I don’t sleep a lot, often going to bed at ten and getting back up at midnight and working through until the early hours, at which point I might go back to bed for a couple more hours sleep.

There is a tangible sense of fear during those five weeks that if I don’t write down the thoughts as they are forming, that they’ll be lost to me, so I never resist the instinct to write, whatever time of day or night.

And there are periods when I lose track of time and myself with it, as I’ll seem to wake from unconsciousness to discover that a thousand words has miraculously appeared.

I still have a full-time job running Clean, our branding agency, and have wondered if I’ll have the ability and desire to write more than one novel a year when I do one-day retire.

Part of me would like to think I could, and yet I consider being given stories to tell to be the greatest of gifts, and so I’m loathe to abuse that privilege by writing more than my allocated quota.