This month has already been absolutely insane for me! But I have huge, exciting news—I’m starting university next month! 😀 I’ll be majoring in Creative Writing + English and Forensic Psychology. This is such a special moment for me. I’ve been wanting to do this for so long, and it’s finally happening!

Since next month is probably going to be a slower reading month as I get into the swing of things, I’m hoping I can get a lot done this month. So please excuse the following, most overly ambitious TBR on the planet! 😛

In an Absent Dream by Seanan McGuire

This is the story of a very serious young girl who would rather study and dream than become a respectable housewife and live up to the expectations of the world around her. As well she should.

When she finds a doorway to a world founded on logic and reason, riddles and lies, she thinks she’s found her paradise. Alas, everything costs at the goblin market, and when her time there is drawing to a close, she makes the kind of bargain that never plays out well. 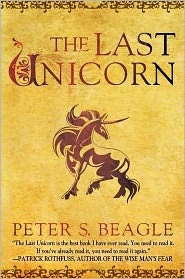 The Last Unicorn is one of the true classics of fantasy, ranking with Tolkien’s The Hobbit, Le Guin’s Earthsea Trilogy, and Lewis Carroll’s Alice in Wonderland. Beagle writes a shimmering prose-poetry, the voice of fairy tales and childhood:

The unicorn lived in a lilac wood, and she lived all alone. She was very old, though she did not know it, and she was no longer the careless color of sea foam but rather the color of snow falling on a moonlit night. But her eyes were still clear and unwearied, and she still moved like a shadow on the sea.

The unicorn discovers that she is the last unicorn in the world, and sets off to find the others. She meets Schmendrick the Magician–whose magic seldom works, and never as he intended–when he rescues her from Mommy Fortuna’s Midnight Carnival, where only some of the mythical beasts displayed are illusions. They are joined by Molly Grue, who believes in legends despite her experiences with a Robin Hood wannabe and his unmerry men. Ahead wait King Haggard and his Red Bull, who banished unicorns from the land.

How to Fracture a Fairytale by Jane Yolen 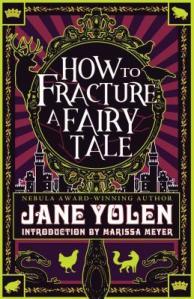 Fantasy legend Jane Yolen (The Emerald Circus, The Devil’s Arithmetic) delights with this effortlessly wide-ranging offering of fractured fairy tales. Yolen fractures the classics to reveal their crystalline secrets, holding them to the light and presenting them entirely transformed; where a spinner of straw into gold becomes a money-changer and the big bad wolf retires to a nursing home. Rediscover the fables you once knew, rewritten and refined for the world we now live in―or a much better version of it.

In a world where every word and gesture is copyrighted, patented or trademarked, one girl elects to remain silent rather than pay to speak, and her defiant and unexpected silence threatens to unravel the very fabric of society.

Speth Jime is anxious to deliver her Last Day speech and celebrate her transition into adulthood. The moment she turns fifteen, Speth must pay for every word she speaks (“Sorry” is a flat ten dollars and a legal admission of guilt), for every nod ($0.99/sec), for every scream ($0.99/sec) and even every gesture of affection. She’s been raised to know the consequences of falling into debt, and can’t begin to imagine the pain of having her eyes shocked for speaking words that she’s unable to afford.

But when Speth’s friend Beecher commits suicide rather than work off his family’s crippling debt, she can’t express her shock and dismay without breaking her Last Day contract and sending her family into Collection. Backed into a corner, Speth finds a loophole: rather than read her speech–rather than say anything at all–she closes her mouth and vows never to speak again. Speth’s unexpected defiance of tradition sparks a media frenzy, inspiring others to follow in her footsteps, and threatens to destroy her, her family and the entire city around them.

Elliot has lived his first thirteen years confined to his home, incapacitated by fear. Now he’s out of pills, snow is falling, and his only safe person is missing. A terrifying thriller from Carnegie Medalist Kevin Brooks.

From the moment of his birth, Elliot’s life has been governed by fear of almost everything, even of his own fear — a beast that holds him prisoner in his room. The beast is kept at bay, though not eliminated, with a daily regimen of pills. But on Christmas Eve, a mix-up at the pharmacy threatens to unleash the beast full force, and his mother must venture out in a raging snowstorm to a store that should be only minutes away. Hours later, when she still hasn’t returned, Elliot sees no choice but to push through his terror, leave the house, and hunt for her. What happens if the last of his medication wears off and the beast starts scratching at the doors of his mind? Everyone has a breaking point — will Elliot come to his? With plot twists and turns that keep readers on the edge of their seats, multi-award-winning author Kevin Brooks offers a high-suspense exploration of fear and what it means to truly be afraid.

Victor and Eli started out as college roommates–brilliant, arrogant, lonely boys who recognized the same sharpness and ambition in each other. In their senior year, a shared research interest in adrenaline, near-death experiences, and seemingly supernatural events reveals an intriguing possibility: that under the right conditions, someone could develop extraordinary abilities. But when their thesis moves from the academic to the experimental, things go horribly wrong.

Ten years later, Victor breaks out of prison, determined to catch up to his old friend (now foe), aided by a young girl whose reserved nature obscures a stunning ability. Meanwhile, Eli is on a mission to eradicate every other super-powered person that he can find–aside from his sidekick, an enigmatic woman with an unbreakable will. Armed with terrible power on both sides, driven by the memory of betrayal and loss, the archnemeses have set a course for revenge–but who will be left alive at the end?

In Vicious, V. E. Schwab brings to life a gritty comic-book-style world in vivid prose: a world where gaining superpowers doesn’t automatically lead to heroism, and a time when allegiances are called into question.

The Girl with the Red Balloon by Katherine Locke

When sixteen-year-old Ellie Baum accidentally time-travels via red balloon to 1988 East Berlin, she’s caught up in a conspiracy of history and magic. She meets members of an underground guild in East Berlin who use balloons and magic to help people escape over the Wall—but even to the balloon makers, Ellie’s time travel is a mystery. When it becomes clear that someone is using dark magic to change history, Ellie must risk everything—including her only way home—to stop the process.

On the Spectrum by Jennifer Gold 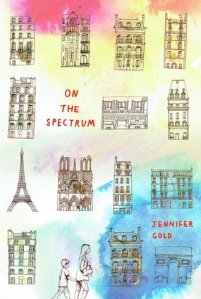 Growing up in the shadow of a famous mother, Clara has never felt good about her body. Now, at sixteen, she has an unhealthy obsession with healthy eating. After a social media disaster, she decides to escape for the summer to Paris to stay with her estranged dad and her six-year-old brother, Alastair, who is on the autism spectrum. Charged with his care, Clara and Alastair set out to explore the city. Paris teaches Clara about first love and gives her a new love of food. And Alastair teaches Clara about patience, trust and the beauty of loving without judgment.

The Red Ribbon by Lucy Adlington

Rose, Ella, Marta and Carla. In another life we might have all been friends together. But this was Birchwood.

As fourteen-year-old Ella begins her first day at work she steps into a world of silks, seams, scissors, pins, hems and trimmings. She is a dressmaker, but this is no ordinary sewing workshop. Hers are no ordinary clients. Ella has joined the seamstresses of Birkenau-Auschwitz.

Every dress she makes could be the difference between life and death. And this place is all about survival.

Ella seeks refuge from this reality, and from haunting memories, in her work and in the world of fashion and fabrics. She is faced with painful decisions about how far she is prepared to go to survive.

Is her love of clothes and creativity nothing more than collaboration with her captors, or is it a means of staying alive?

Will she fight for herself alone, or will she trust the importance of an ever-deepening friendship with Rose?

One thing weaves through the colours of couture gowns and camp mud – a red ribbon, given to Ella as a symbol of hope.

The Last Magician by Lisa Maxwell

Stop the Magician. Steal the book. Save the future.

In modern-day New York, magic is all but extinct. The remaining few who have an affinity for magic—the Mageus—live in the shadows, hiding who they are. Any Mageus who enters Manhattan becomes trapped by the Brink, a dark energy barrier that confines them to the island. Crossing it means losing their power—and often their lives.

Esta is a talented thief, and she’s been raised to steal magical artifacts from the sinister Order that created the Brink. With her innate ability to manipulate time, Esta can pilfer from the past, collecting these artifacts before the Order even realizes she’s there. And all of Esta’s training has been for one final job: traveling back to 1902 to steal an ancient book containing the secrets of the Order—and the Brink—before the Magician can destroy it and doom the Mageus to a hopeless future.

But Old New York is a dangerous world ruled by ruthless gangs and secret societies, a world where the very air crackles with magic. Nothing is as it seems, including the Magician himself. And for Esta to save her future, she may have to betray everyone in the past.

The Assassination of Brangwain Spurge by M.T. Anderson and Eugene Yelchin

Uptight elfin historian Brangwain Spurge is on a mission: survive being catapulted across the mountains into goblin territory, deliver a priceless peace offering to their mysterious dark lord, and spy on the goblin kingdom — from which no elf has returned alive in more than a hundred years. Brangwain’s host, the goblin archivist Werfel, is delighted to show Brangwain around. They should be the best of friends, but a series of extraordinary double crosses, blunders, and cultural misunderstandings throws these two bumbling scholars into the middle of an international crisis that may spell death for them — and war for their nations. Witty mixed media illustrations show Brangwain’s furtive missives back to the elf kingdom, while Werfel’s determinedly unbiased narrative tells an entirely different story. A hilarious and biting social commentary that could only come from the likes of National Book Award winner M. T. Anderson and Newbery Honoree Eugene Yelchin, this tale is rife with thrilling action and visual humor . . . and a comic disparity that suggests the ultimate victor in a war is perhaps not who won the battles, but who gets to write the history.

What books are you guys reading this month? Let me know in the comments!

Leave a Reply to Lauren @ Always Me Cancel reply