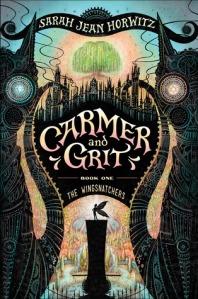 The Wingsnatchers by Sarah Jean Horwitz

Synopsis: A stunning debut about a magician’s apprentice and a one-winged princess who must vanquish the mechanical monsters that stalk the streets and threaten the faerie kingdom.

Aspiring inventor and magician’s apprentice Felix Carmer III would rather be tinkering with his latest experiments than sawing girls in half on stage, but with Antoine the Amazifier’s show a tomato’s throw away from going under, Carmer is determined to win the cash prize in the biggest magic competition in Skemantis. When fate throws Carmer across the path of fiery, flightless faerie princess Grit (do not call her Grettifrida), they strike a deal. If Carmer will help Grit investigate a string of faerie disappearances, she’ll use her very real magic to give his mechanical illusions a much-needed boost against the competition. But Carmer and Grit soon discover they’re not the only duo trying to pair magic with machine – and the combination can be deadly.

In this story perfect for readers of the Lockwood & Co and Wildwood series, Sarah Jean Horwitz takes readers on a thrilling journey through a magical wooded fairyland and steampunk streets where terrifying automata cats lurk in the shadows and a mad scientist’s newest mechanical invention might be more menace than miracle.

I just finished this novel, so I’m still having a bit of trouble settling my thoughts down so I can put them into actual words. Over the years, it has become much rarer for me to give out a full five-star rating to a book, but I absolutely adored this novel. After only the first chapter—maybe even the first few pages—I was already completely hooked and in love with everything about it. It is one of those books that is written for a younger audience, but ends up transcending those limits, creating a magical tale that can be enjoyed by anyone.

This is truly a heart-pounding book. Horwitz quickly makes her readers fall in love with her characters from the very start, causing us to feel a huge range of emotions through all the trials and successes, funny moments and those that break our hearts. I laughed so hard. I deeply felt the moments of fear, pain, and sadness. And I have to admit, I even shed some tears, primarily at the nostalgic feelings this novel evoked for me. I tore through these pages, finding it so hard to put down. I just had to know the fates of these characters I had come to love so much.

Full of mystery, magic, industry and mechanical science, from start to finish it is a compelling tale full of captivating steampunk goodness. It has been a long time since I have been so drawn into a novel. It threw me back to my childhood, to all the years I spent dreaming up fairytales and magical worlds. To all the years of constantly hoping to reach a point where I am able to spend the rest of my days bringing these stories to life for others on paper and in their minds, the same way they came to life for me—the same way they have given me life all these years. This particular tale is most definitely going to stick with me for a long time.

In this novel, we follow the adventures of a young boy named Felix Cassius Tiberius Carmer III (Carmer for short) and a one-winged fairy princess of the Seelie realm named Grettifrida (but always call her Grit). Carmer, a magician’s apprentice and aspiring inventor, and Grit, a sassy, flightless fire fairy, are thrown together as a chance meeting evolves into a race to save the entire fae realm—as well as themselves and the city of Skemantis—from a mad scientist.

When fairies begin to go missing, captured by an unknown evil they have named “The Wingsnatchers”, it is up to Carmer and Grit to get to the bottom of the mysterious disappearances. And what is the connection of these odd events to the unexplainable ones simultaneously occurring in the human world? Mixing science with fantasy, real magic with the closest replications that humans can accomplish, this is an enchanting and fast-paced modern fairytale that will leave readers on the edge of their seats, wanting more.

The depiction of the characters—both the main and the side ones—was one of the standout points of the book for me. Every single one of her characters are fleshed out quite well, and even the most minor of characters are memorable. Carmer and Grit have such a lovely friendship, even though they are each struggling through plenty of their own troubles.

Carmer is attempting to take control of his future and leave behind his past as an orphan, and Grit is trying to make others understand that her disability does not define her—that she is as strong and capable as anyone else, despite what people may think. Though they have some extreme—and understandable—differences and find themselves at odds occasionally, once they learn to trust one another, they end up making a brilliant duo.

This is Horwitz’s first novel, but it reads as if she has been writing for decades. Flawlessly executed and incredibly beautiful, her writing is fluid and easy to fall into. It grabs hold of your imagination, your senses, and hangs on long after the final page has been read. Her vibrant descriptions and world-building are solid, showing her talent for weaving her stories into the minds of her readers.

I truly had an enjoyable time using Horwitz’s vivid narrative to put myself into this unique setting. I felt like I was there watching these events unfold right alongside the characters. She also relates this book to our present world by dealing with some themes that are very common in society today. Horwitz handles every aspect of the novel with care, meticulously unfolding an action-packed narrative. This was just such a fun adventure I did not want to pull myself out of it until I ran out of book.

I will reiterate—though I know I don’t have to at this point—that I completely fell head over heels for this novel. And unsurprisingly, I would highly recommend it to anyone and everyone. It is a beautifully crafted tale of family, friendship, and how two exceedingly dissimilar groups can set their differences aside and team up to fight a threat that affects them all.

Overcoming obstacle after obstacle—even those their own families and sometimes they themselves place in the way—Carmer and Grit unite in a heart-warming friendship that withstands the forces that test it. This is a fantastic beginning to a promising series. Though I don’t quite know how I am going to stand the wait, I am extremely excited to get my hands on any and all future novels.

This week’s Top 10 Tuesday topic is the top ten things that will make you instantly want to read a book. It was a little tough thinking up ten things that turn me on to a book, which is odd considering I will read just about anything I can get my hands on. I guess that goes to show that I will give any book a try, but I somewhat rarely feel that need to instantly pick up a novel. However, there are a few cases where this is true.

Time Travel or Parallel Universes – Anyone who knows me knows that I am absolutely addicted to books about time travel and/or parallel universes. Honestly, this is one of the only cases where there is practically no hesitation on my part. I will literally read anything I find that involves either time travel, parallel worlds, or (preferably) both!

Books About Books – I think many book lovers out there can relate to this one! I love reading books in which reading and literature plays a huge part. This can come in the form of the characters being book nerds like myself, the setting being somewhere like a bookstore or library, or a storyline that is shaped around either a real or fictional book within the book.

Recommendations – I’m not one who typically gives into major hype about books—I have been disappointed many times when I get sucked into that. However, if a friend that I trust and share a similar reading taste with highly recommends something, I will pick it up straight away. People like my best friend Lizzie, and my awesome blogger besties Heather and Anna, are to blame for much of my ever increasing TBR pile!

Retellings – I am a complete sucker for retellings. Whether it’s a retelling of a classic novel, folklore, or fairytale, that’s pretty much all I need to know before I pick it up. This can occasionally amount to me reading a really crappy version of a story I love. But many times I have discovered some absolutely wonderfully crafted retellings with their own unique twist.

Interesting Magic System – I love love love fantasy novels! This is the primary genre that I read, but I do get a bit picky with them, at least in recent years. There are a lot of novels that deal with the same subjects over and over again, and those don’t make for the best reading experience. However, any fantasy novel with a unique-sounding magic system will instantly pique my interest.

Modern Fairytale – As I mentioned, I love fairytales and folklore, and I love present-day novels that give off that fairytale or folklore feeling. I find those types of stories to be absolutely beautiful and captivating. I really hope I can write a story like that one day. 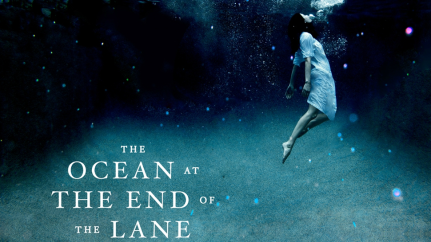 Highly Praised Classic – I am a huge fan of classic literature—I was always that weird kid in English class that loved almost every book they made us read! So if a classic is highly praised, either by people I know or just in general, I will most likely pick it up. I won’t say I always like them, but I’ll at least give them a try!

Little to No Romance – I’ve talked about this many times before, that, despite being a hopeless romantic, I actually really do not like reading about romance in novels. Sometimes a little bit is nice, bit I find that there are so many instances where it completely overshadows the actual plot. So if a novel boasts little to no romance, that’s definitely a plus for me.

Noir or Gothic – I love noir and gothic everything! Books, movies—you name it, I love it! So of course, these are major turn-ons for me when it comes to finding books. If it has a noir or gothic setting, I’m getting my read on! 😛

Sounds Like Sherlock Holmes – And finally, the most embarrassing book turn-on I have to admit. I typically don’t go for books that are compared to other books I love because ninety percent of the time, I end up feeling disappointed in a book that may have been great if I weren’t holding it to the highest possible standard. However, the one thing that gets me every time is when a novel (or a character in a novel) is compared to Sherlock Holmes…or Doctor Who (hence my love of the Jackaby series!).

What are some things that make you instantly want to read a book? Let me know in the comments, and stay tuned for next Tuesday when I talk about my book turn-offs!