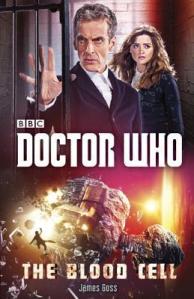 Doctor Who: The Blood Cell by James Goss

Synopsis: “Release the Doctor — or the killing will start.”

An asteroid in the furthest reaches of space – the most secure prison for the most dangerous of criminals. The Governor is responsible for the worst fraudsters and the cruelest murderers. So he’s certainly not impressed by the arrival of the man they’re calling the most dangerous criminal in the quadrant. Or, as he prefers to be known, the Doctor.

What does impress the Governor is the way the new prisoner immediately sets about trying to escape. And keeps trying. Finally, he sends for the Doctor and asks him why? But the answer surprises even the Governor. And then there’s the threat — unless the Governor listens to the Doctor, a lot of people will die.

Who is the Doctor and what’s he really doing here? Why does he want to help the Governor? And who is the young woman who comes every day to visit him, only to be turned away by the guards?

When the killing finally starts, the Governor begins to get his answers…

I have been a fan of this Doctor Who book series for a couple of years now, and the show itself even longer, and have found these books to be very entertaining. Even though they aren’t exactly the best literature ever, they are fun to read and feel a bit like extra episodes of the show. I have really been enjoying Peter Capaldi’s performance as the Doctor and Jenna Coleman as Clara, so I was very eager to begin the books starring this incarnation of the loveable time lord and his clever companion. However, I did not exactly get what I was looking for out of this novel.

The idea for the plot sounded very intriguing, but the execution of it caused it to fall a bit flat for me. The main reason I did not enjoy this book as much as I had hoped was due to the first person narration. Typically, these novels are written from a third person perspective. I think these stories generally work out a lot better with that type of narration because the actions of multiple characters, most importantly the Doctor and companion, can be followed more closely. The insight that a third person perspective gives you as a reader keeps the story moving at a better pace. It is also more interesting, as most readers likely want to actually see the Doctor’s actions play out rather than hear those escapades relayed back to them by an observer.

I also personally found myself not connecting at all with the Governor and not caring much for or about him as a character, which made the first person narration even more of a problem. It got to the point where I did not really care what was happening to him or what he thought; I just wanted to see what the Doctor was up to, how he was handling things. The main point of reading these stories is to see more of the Doctor’s and companion’s adventures and antics, and that was completely lost in this novel.

The setting of the prison and overall concept for the story was a good one and could have easily been a great plot for an episode. In the little that we get to see of them, I thought that the author did a fairly good job portraying Capaldi’s Doctor and Clara. At times, I did enjoy the mystery of why the Doctor was in the prison, and I was definitely intrigued to see how he and Clara would escape from this situation.

Overall, this was not a terrible book by any means, but it was definitely not one of my favorite Doctor Who books. With a few alterations, this could have been so much better than it was. Occasionally I felt that some of this story became slightly repetitive and dragged on a bit without making much progress or uncovering new details. Basically, it seemed like there was a lot of action but they weren’t really getting anywhere. The main details that were finally revealed in the end were somewhat interesting, but they definitely didn’t blow me away; and I can’t say that the reveal made me feel like it was worth getting through the rest of it.