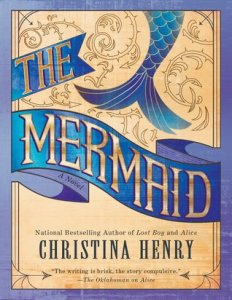 The Mermaid by Christina Henry

Synopsis: From the author of Lost Boy comes a historical fairy tale about a mermaid who leaves the sea for love and later finds herself in P.T. Barnum’s American Museum as the real Fiji mermaid. However, leaving the museum may be harder than leaving the sea ever was.

Once there was a mermaid who longed to know of more than her ocean home and her people. One day a fisherman trapped her in his net but couldn’t bear to keep her. But his eyes were lonely and caught her more surely than the net, and so she evoked a magic that allowed her to walk upon the shore. The mermaid, Amelia, became his wife, and they lived on a cliff above the ocean for ever so many years, until one day the fisherman rowed out to sea and did not return.

P.T. Barnum was looking for marvelous attractions for his American Museum, and he’d heard a rumor of a mermaid who lived on a cliff by the sea. He wanted to make his fortune, and an attraction like Amelia was just the ticket.

Amelia agreed to play the mermaid for Barnum, and she believes she can leave any time she likes. But Barnum has never given up a money-making scheme in his life, and he’s determined to hold on to his mermaid.

The Mermaid is yet another beautiful novel from one of my favorite authors. After first hearing about it, I wasn’t sure what to expect. I, like many other readers, immediately thought we would be getting a retelling of The Little Mermaid in typical Christina Henry fashion. It surprised me to see that this novel would be a historical fiction tale with fantasy mixed in—but, whatever the story, I was here for it. Going in, I knew I would enjoy it, but it surpassed all of my expectations. It is a different style of story than Henry’s most recent works, but it retains all of the raw emotion, vivid backdrops and memorable characters, and that undercurrent of magic that becomes almost tangible.

In this novel, we watch the life of a mermaid named Amelia unfold—as she finds her freedom and her place in the human world. This journey begins when a fisherman accidently catches her in his net. He could not bear to keep her, so he set her free. But Amelia does not forget glimpsing the deep loneliness in his eyes.  She realizes she could not stand letting him remain alone, so she found her escape from life in the ocean and transformed into a woman. And so the pair led a beautiful and happy married life together, until the fisherman was lost at sea.

Meanwhile, P.T. Barnum is looking for his next big exhibit to astound the public with, and he is determined to have it feature a mermaid. When he hears tales of a supposed mermaid living on a cliff by the sea, he is eager to find her. In his eyes, she is the exhibit that will ensure his riches and success. Though he agrees to Amelia’s terms—that she should be free to leave whenever she wishes—he doesn’t intend to keep his promise. There is no way he is going to let his most valuable treasure walk away.

I absolutely adored that this tale was based on historical events—events which I knew very little about prior to reading this. Being able to research P.T. Barnum and his American Museum on the side made my experience with the novel even more enthralling. The way that Henry so fluidly weaves magic into the lives that were real, the places that existed, is beyond brilliant and incredibly enchanting. I have never read a novel quite like this one, and Henry has the perfect style and voice to truly bring something like this to life.

I could talk for ages about Henry’s writing style in itself. Her words flow seamlessly, taking the reader over the pages with ease and leaving them not wanting to let go. The way she builds the settings so vividly and creates the tone and atmosphere with such strength pulls you right in—the sounds, the smells, the intensity of the emotion travel along with you. Her words transfer you into an entirely new place, one that is unique, yet comfortably familiar. I always feel so invested in her characters’ lives, and like I am such a part of their world. And this is how a bit of extra magic is created for us as readers.

There are important messages threaded throughout the events of the narrative as well. Amelia is a strong woman, and she is determined to be independent, no matter what anyone else says. From the very first time we meet her, she is searching for her freedom, and once she has it, she keeps it and holds her own. She doesn’t care what people think or about conforming to the pressures that society puts on women—it is unfamiliar to her, and she will not let her mind be changed by it. Due to being brought up and learning to be a woman under much different circumstances, Amelia has a remarkable insight into the importance of unapologetically being yourself and living the life that is healthiest for you.

As I said before, this novel was everything I wanted and so much more. The multi-dimensional narrative is a joy to get lost in. It is bitter and sweet, heartwarming and heartbreaking, aching with loneliness, longing, and love. This is a beautifully crafted work that will have you spellbound. I cannot recommend this book highly enough for everyone, but especially for those who love to get swept up in a fantastical yet thought-provoking tale.