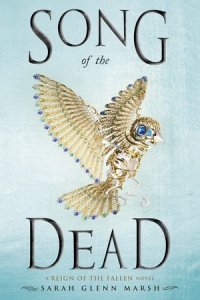 Song of the Dead by Sarah Glenn Marsh

Series: Reign of the Fallen #2

Synopsis: The Dead must stay buried.

Karthia is nothing like it used to be. The kingdom’s borders are open for the first time in nearly three hundred years, and raising the dead has been outlawed. Odessa is determined to explore the world beyond Karthia’s waters, hoping to heal a heart broken in more ways than she can count. But with Meredy joining the ocean voyage, vanquishing her sorrow will be a difficult task.

Despite the daily reminder of the history they share, Odessa and Meredy are fascinated when their journey takes them to a land where the Dead rule the night and dragons roam the streets. Odessa can’t help being mesmerized by the new magic–and by the girl at her side. But just as she and Meredy are beginning to explore the new world, a terrifying development in Karthia summons them home at once.

Growing political unrest on top of threats from foreign invaders means Odessa and Meredy are thrust back into the lives they tried to leave behind while specters from their past haunt their tenuous relationship. Gathering a force big enough to ward off enemies seems impossible, until one of Queen Valoria’s mages creates a weapon that could make them invincible. As danger continues to mount inside the palace, Odessa fears that without the Dead, even the greatest invention won’t be enough to save their fates.

In this enthralling, heartrending sequel to Reign of the Fallen, Odessa faces the fight of her life as the boundaries between the Dead and the living are challenged in a way more gruesome than ever before.

This is a spoiler-free review, however, it may contain spoilers for the previous novel, Reign of the Fallen.

Song of the Dead was one of my most anticipated books of the year and it definitely did not disappoint. I read the first novel in this series at the beginning of last year and I was pleasantly surprised by how much I adored it—though fantasy is by far my favorite genre, certain aspects of the story are a bit out of my usual comfort zone. However, I was hooked right from the start and fell in love with every aspect. It proved to be incredibly refreshing in a genre that can sometimes get to be a bit repetitive, and it truly distinguished itself from the rest. These books are such addicting reads.

This sequel continued to be more of the same and Marsh constantly impressed me with her talent and creativity. It is a journey both physically and emotionally and it carried the reader right along with it. The themes of strength and courage, sadness and resilience, and the tremendous power of love run through this narrative once again. From the beautifully detailed world to the extremely lovable and diverse cast of characters, it is a tale that is equal parts heartbreaking and heartwarming and is sure to stick with you well after turning the final page.

Returning to this world was such a joy and getting to see these characters and their relationships continue to evolve from the last novel was great. So much more dimension is added to an already multifaceted plot. We reconnect with the familiar, but the plot is entirely new and absorbing. Every moment is full of a certain magic with darker and more sinister undercurrents woven throughout. Marsh’s interpretation of necromancy is unique in many ways, which only adds to the intrigue of the narrative. And of course, the animal companions—by far one of the best parts of the story!

Again, the characters ended up being my favorite part of the novel. Marsh approaches diversity in the best way. There is a great deal of representation—particularly LGBT representation—and it makes this novel a fantastic addition to the ever-expanding collection of literature involving these important topics. These elements are not dwelled on or magnified in a way that draws a huge amount of attention. The characters just are who they are, no matter their gender, race, or sexuality. And, as they should be, their differences are completely natural and accepted, both by each other and the reader.

Odessa is an even stronger heroine than in the previous installment and her growth as a character is huge. We see her confronting the painful events in her life, learning and maturing. Her strengths, as well as her flaws, are clearly depicted, which in turn causes her to become an even more multi-dimensional character who is easy to understand and connect with. In fact, this is true of every character. Marsh devotes plenty of time and effort to fleshing them out, making them and their stories incredibly compelling. The romance between Odessa and Meredy begins to really play out and I felt it was executed well—I enjoyed it, and that’s not something I say very often! I thought I would never love anyone quite as much as Evander, who will always be one of my biggest book crushes, but I ended up liking where things went.

Overall, I absolutely love Marsh’s writing and she has quickly become one of my favorite authors. She is always so descriptive and vivid, pulling you into the unique world she has created and building it up around you. Her storytelling style is action-packed and fast-paced but never lacking in detail. She is also an absolute master at creating realistic and relatable characters. I will genuinely read anything and everything she writes. Part of me hates to see this series end, but it concluded in an extremely satisfying way. Once again, my reading coincided with some experiences of great loss in my personal life and again it turned out to be very cathartic, the themes of hurting and healing being especially relatable. This story and these characters will stay with me for a very long time.

Sarah Glenn Marsh has been an avid fantasy reader from the day her dad handed her a copy of The Hobbit and promised it would change her life; she’s been making up words and worlds ever since. When she’s not writing, Sarah enjoys painting, ghost hunting, traveling, and all things nerdy.

She lives in Richmond, Virginia, with her husband and their menagerie: four rescued greyhounds, a bird, and many fish. She is the author of Fear the Drowning Deep and Reign of the Fallen.

10 thoughts on “Review: Song of the Dead by Sarah Glenn Marsh”

Book of the Month YA