I really enjoyed reading this trilogy. There are so many secrets and twists and turns in the plot it is easy to become engrossed and it is hard to put down. The story moves at a solidly fast pace and is packed with many moments of gripping action which pulled me in from the start. There is a good deal of thought and time put into every element of these novels, creating a unique and fascinating narrative. With their rich world and characters, these books make for a fun and immersive fantasy read.

This series begins following a young girl named Ayianna who has just found out she is betrothed to one of the most eligible bachelors in the land. Ayianna and her father set out to meet him and begin this new chapter of her life. However, very soon after arriving, they are attacked by a mysterious group of men, leaving her father dead and Ayianna running for her life. Quickly, it becomes clear that this is not just an isolated event—that her father was keeping some important secrets and that their world is facing a great danger. Reluctantly teaming up with an elf named Kael, Desmond her betrothed, and Prince Vian, Ayianna sets off to find her mother and unravel the mystery her father left behind.

Much more happens during the course of this trilogy, but since this is a spoiler-free review, I’ll keep from going into any more detail about the plot. However, I will say it remains consistently fresh and intriguing throughout the entire narrative. There is plenty of gripping action and adventure, surprising revelations, and mysteries that keep you wanting more. I particularly loved the fight scenes, especially when the characters were up against frightening creatures like the imps. This made for many exciting and heart-pounding moments.

Occasionally, I found that the plot sometimes became a bit slow and repetitive, primarily in the first novel. For instance, when Ayianna and her companions begin their journey through the forest, it progresses a bit slowly with the characters arguing about the same things—Vian and Desmond wanting to lead them in another direction and Kael insisting he knows where to go. While there are some moments of action and adventure, it felt as though a lot of this portion of their journey consisted of this with not quite enough variety in their interactions. However, this was not a frequent issue.

The best part of these novels is the incredibly beautiful and detailed writing. Mbewe has a great talent with words, taking the magic and fantasy to a new level. The worldbuilding is absolutely fantastic the whole way through and makes you feel like you are really in the world. Mbewe constructs it in a way that is original but has that classic fantasy novel style and feel. Every setting enhances the tone of the scene that takes place in it and adds tons of dimension to the plot.

On top of the vivid descriptions of the world, Mbewe fills it with its’ own very interesting history. This element adds so much more depth to the story. It is clear that she put a huge amount of time and effort into imagining every bit of it. There are also plenty of different creatures that add to the fantastical nature of the narrative. This also adds variety to the characters as they are not all humans. And each type of creature has a part in the history of the world with fully developed backgrounds.

Mbewe completes the building of the plot with some very well-created and multi-dimensional characters. Even some of the more minor characters are developed fully. Kael was definitely my favorite out of everyone. His personality and dialogue are some of the best aspects of the story. He is sarcastic and funny with a true heart of gold and is just plain loveable

It took me a little while to decide how I felt about Ayianna as I did not entirely connect with her at first. However, she proved to be quite a strong heroine in the long-run. There were times where I felt she was not quite reaching her full potential when it came to being the tough, independent character she is through the majority of the book. But the more I thought about it, the more I realized that this is a pretty accurate reaction to the situation she has been thrown into. Her life goes through so much upheaval and she is dealing with a massive amount of grief. Yet she pushes through it and bravely carries on through this journey.

One other issue I had with the characters at times was that their emotions were not always addressed in a consistent or realistic way. There were many instances where I did not think Ayianna’s feelings and thoughts matched up with the gravity of the situation. After everything she had gone through, her reaction lacked some intense emotion it could have had, allowing the reader to connect and sympathize with her even more. The early tension between Kael and Ayianna seemed a bit confusing. It quickly felt a bit forced and like there was not really a need or reason for it. That being said, I absolutely loved their dialogue with each other and ended up really liking their relationship.

I do consider the issues I did have with the narrative rather minor in the grand scheme of things. The characters developed well throughout the course of these books and they grew into their newfound roles. None of the main characters are ever one-dimensional and they became more complex as the narrative progressed. Constantly growing as people and in their relationships with each other, they are always interesting to follow and learn more about. The worldbuilding remains detailed and vibrant, expanding more and more, and is always fully and uniquely constructed. The writing is consistently rich and beautiful. Overall, this is a really solid trilogy.

Synopsis: With a curse, she will build an army. With the dagger, she will undo the last sacrifice. But first the sorceress must find the secret keeper.

Torn from her homeland and thrust into a betrothal against her wishes, Ayianna learns her family has a deadly secret that now has her on the run. She joins forces with Kael, an embittered half-elf, and Saeed, an elderly High Guardian, to seek answers to her father’s death, the destruction of Dagmar, and the plains people’s bizarre behavior.

Ayianna discovers there is more at stake here than just her mother’s disappearance and her familial duty to her betrothed. The sorceress has cursed the plains people, and it is a race against time to release them before the sorceress resurrects an ancient evil.

Synopsis: The Secret Keeper is on the run, but does she know the secret she keeps?

Ayianna is a cursed half-elf betrothed to Desmond, but her heart belongs Kael. After discovering the cure for the Sorceress’s curse, she and her companions embark on a dangerous quest to retrieve the ingredients.

When dragons descend upon their party, Ayianna realizes the Sorceress is searching not just for the corrupted dagger, but a human sacrifice that will open a portal to the underworld. Battling deadly creatures and natural disasters, Ayianna is forced to confront her insecurities and conflicted heart. She must decide whether to be true to her family or true to herself.

As the nations rally for war, betrayal threatens to destroy them all, and it’s a race against time to return before the curse destroys the plains people.

Synopsis: Kael’s worse fears have come true. Betrayal has shaken the Guardian Circle, the High Guardian is dead, and Ayianna and Prince Vian are in the hands of the Sorceress, but he and his companions must finish their quest, before they can attempt a rescue mission. Unfortunately, Desmond’s parting gift left them stranded on the western cliffs of Nälu.

Jathil, once heir to the throne of Arashel, believes her father will aid them, but first she must face the crimes of her past. When she does, she could never believe the outcome, nor the rippling effect it would have on the nations. Meanwhile the Alliance braces for war, but division threatens to undermine their efforts. When Nerissa returns from Ganya with the dragon regiment, she discovers a bigger problem. The curse bound are waking up.

As the quest nears completion, Kael is forced to choose between his heart and duty, and neither choice bodes well with him. Either way, he will face the Sorceress and her armies sooner or later. The battle for Nälu has begun and there can be only one victor. 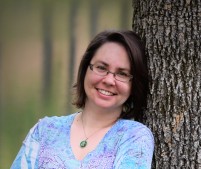 Writing as J. L. Mbewe, Jennette is an author, artist, mother, wife, but not always in that order. Born and raised in Minnesota, she now braves the heat of Texas, but pines for the Northern Lights and the lakes of home every autumn. She loves trying to capture the abstract and make it concrete. She is currently living her second childhood with her wonderful husband and two precious children who don’t seem to mind her eclectic collections of rocks, shells, and swords, among other things. Here, between reality and dreams, you will find her busily creating worlds inhabited by all sorts of fantasy creatures and characters, all questing about and discovering true love amid lots of peril.

Her debut novel, Secrets Kept, was nominated for the 2014 Clive Staples Award. Her second novel, Darkened Hope was a semi-finalist for the 2017 Alliance Award.

9 thoughts on “Review: The Hidden Dagger Trilogy by J.L. Mbewe”